I can’t believe it’s been a year.

An. Entire. Year. Well, give or take two weeks.

Since when, you may ask?

Since my train was stranded in the middle of no where, and since my new release, Stranded at Night, was inspired.

On Sunday, February 24th, 2019 at approximately 6pm, the Amtrak’s Coastal Starlight train I was on travelling south towards my hometown, struck a downed tree branch in the Oregon wilderness just north of Oakridge, Oregon, about 36 miles south of Eugene, Oregon. It was snowing harder than I had ever seen in this part of Oregon in the 20+ years I have lived here.

All 188 passengers on this train were thrown forward as the emergency brakes kicked in and screeched us to a stop. The tree significantly damaged not only our air brakes, but the engine. The conductor, engineer, and another civilian engineer could not fix it. We managed to get 6 miles to flat ground and firmly in the center of Oakridge, a town completely crippled by the storm with no water, heat, or power access at the time.

After 12 hours, the train had not moved.

Passengers awoke that Monday morning to a gorgeous winter wonderland, and not the one we expected nor wanted. The engineering team who spent 4 hours traveling 36 miles in blizzard conditions were not able to repair our train.

We were effectively dead in the water, during the worst snow storm Oregon had seen in over a hundred years.

With over three feet of snow in every direction and temperatures well below freezing, I found out later Amtrak made the difficult decision to “strand” Coastal Starlight Train 11 in the wilderness outside Oakridge, Oregon. Looking back, it was the safest option for all 188 passengers, who had heat, water, food, and access to bathrooms. They made the best decision. However, being stranded for over 52 hours was not in the plan.

I want to say the first 24 hours were the most difficult, but almost a year post-event, I’m not sure I can justify that disposition.

When I review the events of those two and a half days, I look on them fondly, remembering stories told, friends made, and experiences had. At the time if you would have asked me if I was enjoying myself, however, that would be a firm no. I was missing classes I had to teach, cancelling meetings, and my boss was angry I wasn’t able to “walk off the train” and find a way 270 miles home (despite every major highway and interstate in the Oregon being closed). Another faculty member (she knows who she is) took my classes over in order to ensure my students were still able to complete their technical reports on time. My disabled, veteran husband was stranded at home with two teenagers, in need of groceries and a few other items that would have to wait until I could get home.

After the first twenty-four hours, with no cell service for 90% of the passengers, no news, and no signs of rescue, I broke the news to the world via Twitter on Monday afternoon. I was utterly shocked then the news agencies came flooding in.

I took seventy calls in the first two hours after my tweet and answered just as many direct messages. The Oregonian was the first to contact me with a national interview that went viral. From 2pm Monday afternoon to 7am Wednesday morning, I conducted over a hundred interviews, fielded phone calls, and replied to as many messages as I could. My live CNN interview went up at 3:15 a.m., followed by multiple live interviews with Good Morning America, Inside Edition, Anderson Cooper, and over fifty ABC, NBC, and CBS affiliate interviews.

Back home, my family, friends, and students saw me on the news. Both my kids, ages 14 and 16, kept messaging me on Snapchat:

Both my parents, seasoned veterans of both the Vietnam and Gulf wars, calmly texted me to ask if I was making sure all the women and children were taken care of and reminded me to be respectful of others and tell the truth to the media. Looking back, I truly believe that my parents’ absolute calm about this disaster was important in keeping me from the hysterics spreading among our passengers like wildfire.

It still surprises me that I was one of the handful of people on the train who were willing and excited to talk to the press about our plight, especially considering I’d been diagnosed with a crippling anxiety and panic disorder in 2018 that left me without the ability to drive or perform some of my work tasks.

Yet I was somehow in “teacher mode” at that point of crisis. I’d been up for over 24 hours and was still taking phone calls and answering messages like a champ.

I vaguely recall an interviewer – I think it was the Weather Channel – asking me how I was remaining so calm. I had laughed and said something about how it was nothing compared to dealing with thirty plus college students who had to write research reports. Truth is, I’ll take the students any day over being stuck on a train! But to be honest, growing up a military brat and constantly hearing my dad’s warzone stories, being stuck on a train was nothing. As least there were no missiles, unfriendly fire, and guerilla forces outside!

The night culminated with our rescue at 7am Wednesday morning.

Western Pacific had finally sent an engine and towed us back to Eugene, Oregon. I was on a live interview when the train moved for the first time in two days. A few of the people standing next to me wept with joy. We arrived in Eugene amid snow flurries to a town that was still crippled from the storm.

As long as I live, I will never forget the moment my best friend – who just happened to live in Eugene but was a veteran of snow driving! – rounded the corner of the train station, armed with a vegan burrito and my favorite coffee. I ran up to him and hugged him with everything I had.

Never had I been so happy to see any human being on the planet, not to mention being on solid ground for the first time in over forty-eight hours was amazing.

Two days later, after the interstate was reopened, I was finally able to rent a car and drive home. My 4 day business trip ended up taking 8 days.

Truthfully, I downplayed our plight to a lot of news stations.

Yes, we had food, water, and bathrooms. The general mood on the train was good overall, besides the normal anxiety that came with the plight of our disaster. I know they wanted tales of violence and justice and frustration, but honestly, I didn’t have any to give them. In reality, I talked four students out of panic attacks, observed a conductor try to calm down about five or six passengers that were screaming in their face (as if they could do anything about being stuck!). We ran out of food the first day (as Amtrak graciously fed all the passengers free of charge!) and so did the café car as well. One of our veteran passenger’s service dog ran out of food. There were no diapers, and feminine hygiene items were scarce. All of this, however, was never any of Amtrak’s fault whatsoever. In fact, now that I know all the facts, the way Amtrak covered the entire situation was all together professional, ethical, and respectful to everyone involved. They took care of us all and saw as many passengers home – on Amtrak’s dime – as they could.  I truly do thank Amtrak for being so great about the whole situation, as well as the Eugene Police Department, who provided breakfast when we got into town, and the Red Cross, who set up hot drinks and assistance for passengers once we disembarked.

Besides these great agencies who stepped up to take care of us, there’s also a few shout outs to people I met on the train. I could tell you stories all day about the people I met, but names escape me, and I’d hate to bog down this book with “that one girl who played the ukele” or “the lady with the three year old” as I coded them (sorry, I told you I had professor brain during the whole ordeal!). In no particular order, though, are my top most memorable people that made a difference on me in one way or another (names have been changed to protect the innocent – but you know who you are!).

In the end, 52 hours on a train ended a lot better than the story you will read within these pages.

Although the names of the innocent have been changed in this fiction story, some of the characters you might read are absolutely inspired by the real-life characters I met during this experience. No, no one actually got murdered on our train, and the plot and characters are completely my own, but the dialogue, characters, and scenery are all impacted by what Twitter dubbed the #42hourtrainride. I hope you enjoyed this tale of intrigue and mystery, all aboard the California Express, and remember that even in the worst of times, there is still a silver lining. 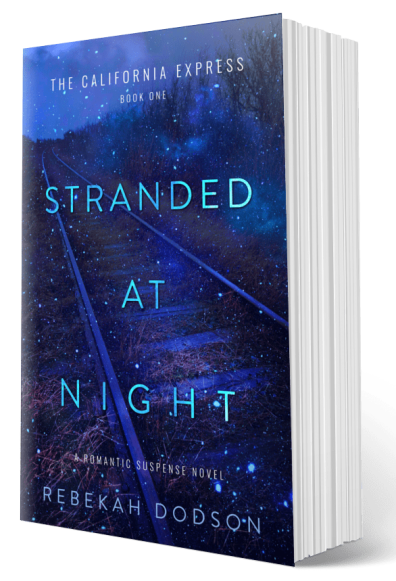 Pick up your copy of Stranded at Night here.