Saved from the streets by the mysterious George Whipple, Parker and Lydia grew up in the Whipplehouse Orphanage. After being fitted with a magical monocle, Parker finds he has the ability to stop time. With his new power, he spends his days tinkering and inventing intricate do-dads. Life was grand until the night Elias came to town.

Parker’s life is turned upside down when tragedy struck on the night of the winter solstice of his 18th year. He risks losing the one thing he loves most: Lydia. But, will his newfound power be able to find her? And what about the perplexing machine in the cellar workshop?

narrated by the lovely Irish accent of the talented Andrew McDermott! 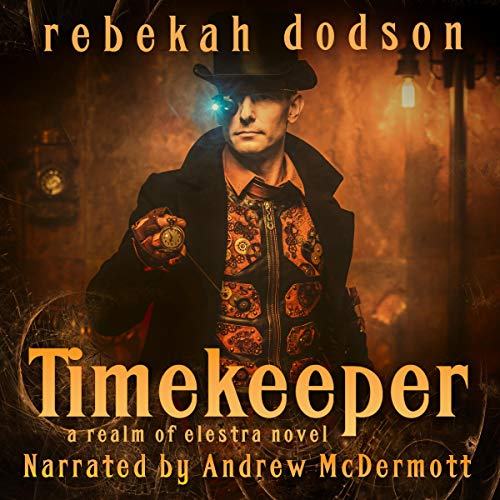 Lydia (Book 2 of the Realm of Elestra Prequels Series)

Ripped away from Whipplehouse and the only family she had ever known, Lydia ekes out a living in the barren wasteland of Oregon as a prisoner of a family who never loved her. When Parker finds her at the county fair, Lydia can hardly believe her luck as she agrees to travel through time with the boy she once loved. They finally settle in the mysterious land of Elestra, a world like their own with magical powers, steam-powered devices, and even dragons.

Abruptly left to her own devices on the shores of Sea City, Lydia embarks on a dangerous adventure with fast cars, accompanied by the infamous and quite exiled pirate-turned-mechanic Matthias Cross. When the tables turn and she begins to see Parker for who he really is, how can she escape the darkness buried in his heart? What will become of Lydia now that she knows there are more worlds than these?

narrated by the lovely Irish accent of the talented Andrew McDermott!

New Release: Clock City, Book 1 of the Realm of Elestra!

Since Mom died and left me with my abusive, drunkard of a father I don’t have much of a life. My only sanctuary’s hidden in the woods. At least until I find a jeweled dagger and it transports me to somewhere called Elestra. I seriously can’t believe this isn’t some crazy dream, with mechanical horses, cat people, demons, and even metal dragons.

I just want to go home, but everything is a disaster in Clock City.

Who’s this mysterious girl who appeared in Elestra? Alayna wears strange clothes and keeps complaining about something called a “cell phone.” She even has a demon with her who’s sworn a life debt, and now I’m bonded to her to help save the kingdom.

I’m just Sebastian, a secret tinkerer. How am I supposed to help her, and the rebellion, save the city? My life has flipped upside down, and I don’t know if I have what it takes.

No matter what happens it’s up to us to show the world what freedom truly looks like.

Visit the rest of my page for books, blogs, and more!