I’ll never forget the day I walked into my externship with a local craft magazine four years ago. The editor behind the desk was a large and imposing man, who had crafted a magazine that went out to some 300,000 readers. And he picked me to write some articles, and do some editing, in preparation to receive my college degree. Me. I felt so unqualified.

“Have you heard about this Steampunk thing?” He said to me, looking over rounded glasses. “It’s taking the art world by storm. It involves 19th century fashion with modern technology, and I need an article on it.”

I blinked once, twice. Painting, palettes, and plaster, that’s what I had signed on to write. Steampunk? What was

that? I had never heard of it. I voiced my displeasure.

“Today, you’re an investigative journalist, you figure it out,” was his only response.

Daunted by a task on a subject I was unfamiliar with, I did what any journalist-in-training would do: I set about conducting research. I went to my local library; I did some searching on the internet. I even ordered a couple of magazines. 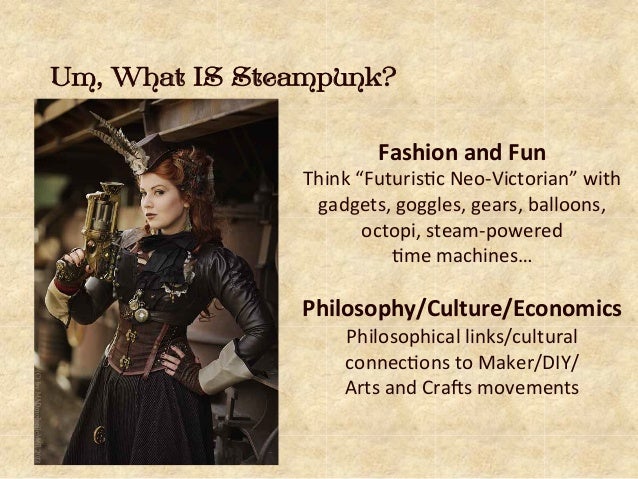 My editor wasn’t kidding about Steampunk being the next big thing in art. Or fashion. Or culture. Though technically still considered a subculture and generally categorized with other cosplaying activities like Comic Con and the like, Steampunk is in a world of its own. I was shocked, I was struck with disbelief. Who were these people who stepped out of a Victorian fashion advertisement? Who carried a mix of technology and old-fashioned weapons? Who could fashion a costume into an air pirate or a winged creature or a lady of the night?

In a week, I had a five-page article about the Steampunk movement, and how it reflected into the world of ceramic and pottery arts.

Little did I know it would take over my life.

From then on, my little obsession grew. I had always been a fan of history, but for a twist of fate and an unexpected move across state, I would have been a history major. I settled for journalism, instead. If I couldn’t study history, at least I could write about it. My favorite period had always been Victorian, through about 1920. I loved the fashioned, the way ladies carried themselves, and way the gentlemen dressed. I had no idea there was an entire group of people out there that still followed these amazing trends. And even better – with a twist of Tesla like ingenuity, and added modern techniques.

Coming into the fandom back in 2010 was really like coming home for me. Previously I dabbled in a bit of video games fandom, mostly just because my husband was into them. I watched football because my best friend had a penchant for a Las Vegas team. But I had nothing to call my own. It was always something I went along with, something I just did to be included in the group.

The first article was like some kind of addictive drug, and it steamrolled into something more. For two years, every article I wrote had some kind of Steampunk element: from the graphics design to the technological advanced. I inserted the themes everywhere I could, to the point where it was unintentional. In 2012 I started a travel magazine on my local community, The 13th Floor, with heavy Steampunk elements. I didn’t realize it, not really, until my assistant editor said one day, “What’s with all the cogs and wheels and stuff? Since when did we go back to the 19th century?”

I had no answer for her, and I still don’t. I can’t explain my fascination with Steampunk, but I feel that it’s my identity, and it chose me. A year into my magazine, business owners from my community started coming out of the woodwork. A local mask maker and artisan crafted a Steampunk mask when I featured her business. A local ballroom and restaurant owner put on a wildly successful Steampunk ball. My social media exploded with business associates as well as friends and family, who all felt the need to share anything and everything Steampunk with me, in the hopes I would publish it in my magazine.

Nonfiction wasn’t enough for me, and I started dabbling in fiction, too. I wrote a couple of short stories in the Steampunk genre, submitted them to a couple of magazines. The denials were so overwhelming. Science Fiction magazines wouldn’t touch it, and many of the self-proclaimed Steampunk magazines weren’t looking for fiction. I felt like a part of me was dying; I was born to write Steampunk, to wear it, to tell the world. I couldn’t do that if no one was accepting my craft.

Despite this discouragement, I persevered. Writing and Steampunk, both my drug, became my life. Last year, I started a new journey in the world of creative writing, by starting a graduate program in English. For anyone that has gone through such a rigorous program, you know it’s not for the faint of heart when it comes to writing. I went into graduate school completely confident that I had the tools to succeed.

But then came my thesis. Terrified, I rifled through short stories, looking for something, anything I could turn into a full length novel. One story I wrote about a girl who finds a magical dagger and is transported through time caught my eye. I hated it so much I shelved it. It was my most rejected piece. I put it aside once more.

In March, when my first book came out in the romance genre, I was featured with Authors on the Air, a podcast series for new and upcoming authors. The very last questioned they asked me threw me for a loop: What did I plan on writing in the future? Steampunk, I answered, without missing a beat. After the interview concluded, I panicked. Why did I say that? I wasn’t good enough to be a Steampunk writer. I was a journalist first and an author second; surely I wasn’t prepared to take on such a genre that deserved the very best writers out there.

Just days after that interview, I connected with another author, Jim Musgrave, author of Steam City Pirates series. I picked up a copy of his book.

And devoured the entire series in just a few days.

Jim and I talked often; about our inspiration, our publishing blues, our amount of rejection. A retired school teacher, he had more to say on Steampunk than I had ever heard. And we talked at great length.

I pulled out that old story I had put away, and looked it over. It was okay, I decided, and after talking to Jim and learning the Steampunk genre was ripe for the taking, I decided to turn it into my thesis.

Anyone who has completed a thesis knows that you spend several months with what becomes your pride and joy, your second child, your precious. You agonized over it night and day, and it becomes a priority. You cry when the professor makes corrections, but you take the rough draft and turn it into something beautiful.

I finished my 4-part novel series Clock City in 90 days, after a grueling six months of thesis classes and walking away with an English degree. I didn’t have much of a choice; any writer will tell you that when the mood hits, you are powerless to stop it. This is exactly what happened. Whenever I got stuck, I went back to my research that I had collected over the three years since I officially became a fan. I had so much material, from my own costumes and masks to the experiences I had talking with different people and professionals, as well as graphics galore and posters a plenty.

My novel became something beautiful. I wove the story of Alyssa, a young girl who entered a dangerous Steampunk world filled with automaton dragons, magical daggers, and light spinners. I put my heart and soul into this project, all the while thinking it was never good enough.

Something wonderful happened along the way, before I was even accepted for publication. In the few short months I crafted these novels, my world became a little brighter, and my excitement was contagious. I had fellow writers, unpublished, coming to me for advice and editing. I connect with other published authors, and learned under their tutelage. My children, ages nine and twelve, started writing epic adventures, and bringing me story after story to examine. My husband even caught the Steampunk bug, changing his entire wardrobe and helping me with research.

Steampunk didn’t just change my life; it took over.

I never knew that a simple assignment years ago would take me this deep into the wonderful world of Steampunk, but I’m so glad it did.

If you had asked me a year ago what I’d be writing, I would have told you I’d still be a journalist, whittling away the time on news stories and events. Ever since I discovered Steampunk, I’ve found myself, and journalism took a back seat. It took me thirty years to find out who I was, but now I know I was born to do this. I was born to write, study history, and share it with others.

I’ve never been to a convention; I’ve never rubbed elbows with the greats in this genre. But now I know who I am: I have always been, and always will be, an author first. I am the reluctant Steampunk author, and it will always be the greatest decision of my life.

Everyone Needs a Bard